Australian of the year nominee, best-selling author, research scientist, life coach and innovative creator in the health and personal development industry, Rhett Ogston aims to transform and revolutionise our mindset and hence the world!

Albert Einstein understood that an inherit issue for all mankind was our limiting mindset and was best articulated in his renowned quote “problems cannot be solved with the same mindset that created them!”

Rhett is an inspired individual who dedicated his life to finding the solution to this problem. A limiting mindset prevents all people from reaching their life’s potential. The solution to this problem is to resolve our self-imposed limited mindset. By doing so we can all create a life where synergy, alignment and authenticity allows the optimum self to prevail so that one can live a life of purpose.

Rhett consistently aims at the highest possible standards not only for himself but for every book he writes, every product he produces, every technique he creates, every system he founds, every team member he trains (hyper link to team members). Rhett’s unyielding quest to create the best technology, designed in the most logical and simple way, that is easy to understand and intuitive to use has generated the solution that is robust (e.g. his technologies can be used anywhere, by anyone, at any time) and easy to implement.

This solution of freeing a mindset when applied in an environment supported by Rhett Ogston (ROA) created systems and technologies, by ROA trained team members, using only ROA compatible products and techniques can the possibilities of living a life of purpose be fully appreciated by consumers. 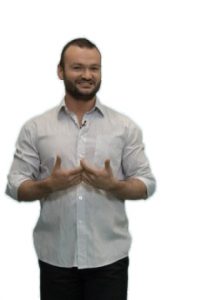 This is Rhett’s Story

Rhett’s Mother was a victim of a careless driver in her youth. As a result of the accident she was left with a twisted spine, which caused all sorts of pain for her. So from a very young age Rhett began alleviating his Mother’s pain and suffering using his innate massage skills and realised he wanted to heal people and had a gift for it (that or become a lawyer: how glad are you that he chose healing?!). As soon as he could afford it, he enrolled in every short course on massage. Although he always knew he wanted to heal people, it was around the age of fourteen people started telling him ‘you really need to think about what you want to do in life’. So this got him thinking and initially he thought he wanted to become a doctor of Western Medicine, however, in the end his love for science won out. He spent five years learning all there was to know about every possible science, ranging from biotechnology to pathology and physics.

During his final year, he was invited to become involved in an Honours project, which investigated the immunomodulatory properties of Chinese herbs. In short, using the science knowledge he had gained, to scientifically prove an ancient healing method. It can be said that in completing his Honours degree and proving scientifically the beneficial effects of an age old medicinal system, as well as, adding to the collective body of knowledge of science was a great goal attainment, for him. After a short stint in the US, he returned and completed a degree encompassing Chinese Medicine and Human Biology at RMIT. Rhett was a self funded student and worked many varied jobs such as fresh produce manager, night fill manager, bakery attendant, labourer, landscaper, bar man, gaming machine attendant, bouncer, waiter, writer, presenter and a scientist, just to name a few. The three most valuable things he learnt from this experience were: He did not wish to work for bosses driven only by dollars, (therefore he needed to be self-employed); working in these jobs made him realisze his true passion lay in helping people; and he wanted to make sufficient money to lead a happy life. Therefore, he became a healer, utilising any technique that he found which has the ability to heal people. He has now extended this healing principle into writing books to help more people worldwide and achieve his goal of rapidly and dynamically transforming the world!

“What Steve Jobs was to computers and technology,
Rhett Ogston is to health and personal development”