Traditional Chinese Medicine and Emotions – Why our Emotions are so Important to Reach Health. 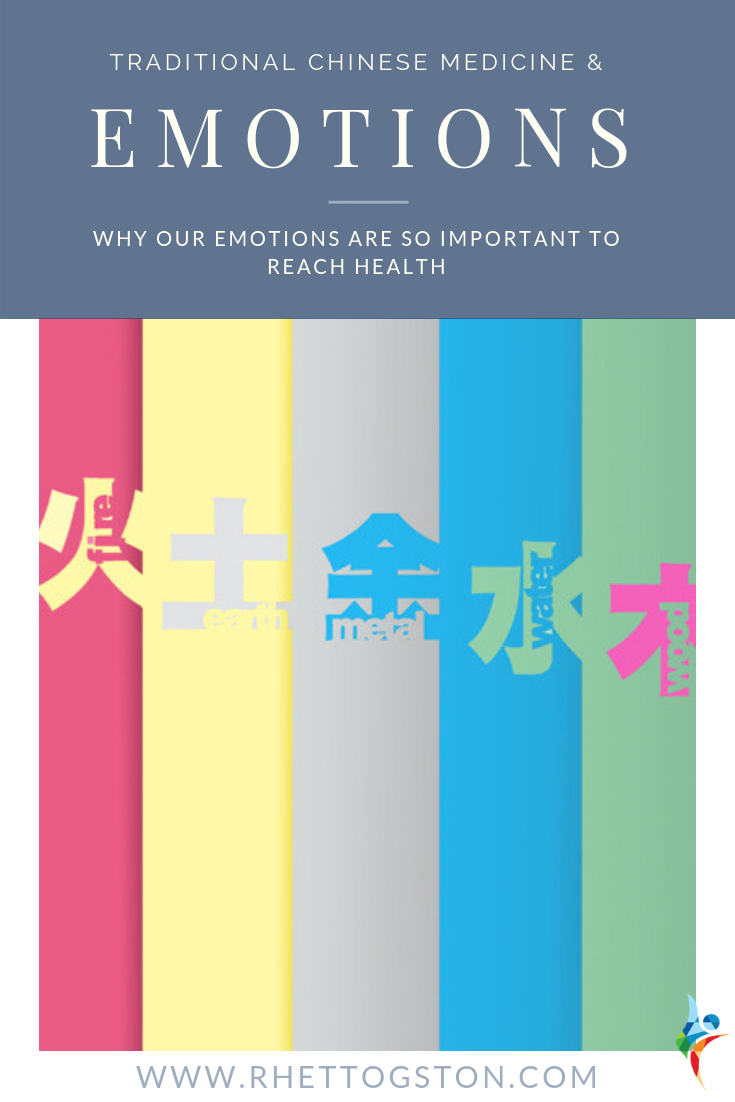 Traditional Chinese Medicine – Why Emotions are so Important

Traditional Chinese medicine (TCM) practitioners have recognised the importance of emotions and the side effects of ineffectively processing your emotions as a cause of disease states. Emotional disharmony is extremely important in TCM, so much so, that emotions and emotional disharmony are considered one of the major causes of disease (aetiology). TCM theory maintains that there are five principle emotions (fear, anger, grief, worry and over joy), of which all other emotions can arise from, and all need to be considered in any disease state. Each emotion, when ineffectively processed, impacts on its correlated internal organ, which is based on the TCM theory of the Wu Xing (commonly known as the five elements or the five phases), thereby resulting in the poor functioning of that organ and subsequent disease states.

For example, let’s say that you continually feel the emotion of worry, commonly experienced by individuals today, worried about family, money, health etc. Instead interpreting worry as your guidance system suggesting that you need to change something, you react to the emotion of worry. We refer to this as an individual, as an ‘emotional reactor’ who will now be ineffectively processing the emotional messages coming in/ (input) of life (which means diminished output) resulting in reactive decisions and actions. I go into details about the input and output system in reference to processing emotions on the ROA pro•m•emo blog ‘Process Emotions Energetically’.

Following TCM theory, excessive worry may cause a disharmony to its corresponding internal organ the ‘Spleen’ (based on the TCM five elements theory relationships). When the TCM concept of the ‘Spleen’ is inefficiently functioning the TCM practitioner is expecting to observe symptoms that indicate a ‘Spleen disharmony’, which include loss appetite, low energy, bloating, and changes in bowel function just to name a few. These correlating symptoms along with a tongue and pulse diagnosis are used by the TCM practitioner to identify the disharmony, which in this example would be ‘Spleen deficiency’ caused by the emotion of worry. If the ‘Spleen deficiency’ is not addressed, it will lead to more serious disease states.

It stands to reason that if any emotion is not immediately addressed, and there is ineffective processing of emotion, moving past it seamlessly, the result is inevitably disease. TCM has created various treatment plans to address each of the five emotions (when in disharmony) and their related organ dysfunction using predominately Chinese herbs and acupuncture interventions. The issue with these treatment methods, is that they rely on you ‘successfully’ disrupting your emotions to the point where your body creates the symptoms which then become distracting enough to your life that you are now driven to seek out assistance. If you happen to choose the assistance of a TCM practitioner, they would then prescribe you Chinese herbs and/or acupuncture based on their interpretation of your symptoms as indicated in the example above.

If, however, you did not go to a TCM practitioner but instead were driven to seek the assistance of a medical doctor, a naturopath, a western herbalist or some other practitioner, they too would devise a treatment plan, which often involves taking some form of ‘medication’ which is prescribed based on their interpretation of your symptoms that result from poor emotional processing (diminished output which is often due to overwhelm as previously discussed above). Your treatment plan may occur without considering your processing abilities as a causative factor to your presenting symptoms! In any case, by the time you reached this point, the loss of harmony has already occurred. The question to you, dear reader, is; “why wait until when you are sick?” Why not process your emotions when they first arise? This makes logical sense! Hence the old saying “a cup of prevention is better than a bucket of cure”.

We often blame others (an input) for how we feel (our emotions) and fail to acknowledge that irrespective of the emotion, it is our emotion. Recall from above that emotions are our guidance system. The essence of ‘emotional mastery’ is being able to master the ‘how-to process emotions’ component of any and all of your emotions in order to become an ‘emotional responder’. An emotional responder (master) possesses the ability to live in emotional flow (output equal to input or said another way optimal emotional health and wellness!) rather than suffering the turbulent life of a ‘emotional reactor’. It therefore makes good sense to Process My Emotions effectively before they create disharmony because if left unchecked they will develop into symptoms, which if they are ignored, will cause disease!

This is the inspiration behind the pro•m•emo elixir range. Obviously, we are not the first to claim that emotions, when manipulated, managed, denied, blocked, controlled, or impeded or just not effectively dealt, have the potential to cause symptoms which inevitably becomes ‘diagnosed’ as disease. As previously explained, TCM theory acknowledges this, as do other traditional medicines, such as Ayurveda, and as did Western medicine physicians, such as the prominent U.K. Physician Dr Edward Bach (1886-1936) who pioneered the discovery of making medicinal tinctures from flower blossoms, which he called flower essences, more commonly known as Bach flower remedies. From its humble beginnings in the U.K. back in the 1930s, Bach flower therapy has flourished to having practitioners now located in over 60 countries being taught in 40 countries around the world!

This was all based on Bach’s observation that disease was heralded first by a person’s emotional state and that through his own intuition made an association between the healing potential of flower blossoms on emotional states and physical disease states. That is, Bach over time intuitively identified thirty eight flower essences, which he associated with having a ‘healing’ effect on various emotional states. Obviously, he needed to test his intuitive associations on people. Being a physician, he ‘experimented’ with his own patients who consulted with him seeking relief from their ailments, and what Bach observed only confirmed his intuition, that is, not only did his patient’s emotional state improve when a specific flower essence that he prescribed was used, but the patient experienced a new enthusiasm for life which paralleled an actual healing of their physical symptoms.

It all started 15 years ago in my honour’s year of my Science degree at Melbourne University when I was researching “The immunomodulatory effects of Rehmannia Six Formula”. My research demonstrated that there was a synergistic effect between the herbs in the formula that enhanced the bioactivity of the preparation. That is, when these six herbs were tested in various combinations for their effect on the immune system, some combinations of herbs reduced the immune response and others increased the immune system response. This was shown with different combinations of these herbs, but when all six were combined together, as they are in the Rehmannia Six formula, this ‘whole’ combination not only stimulated the immune response, it was the strongest enhancement, in comparison to all the other combinations we tested.

The synergy I observed between these Chinese herbs inspired the thought; if synergy exists between herbs, then it must also exist between everything else! This became the driving force behind my research and exploration of life which, through much dedicated investigations, lead me to the development of the pro•m•emo elixir formulations. The pro•m•emo elixirs, like the Rehmannia six formula, represents synergism, however, not just of individual herbs but the synergistic fusion of purposefully selected Chinese herbs, Western herbs, Bach flowers and homeopathic preparations.

This process was complex and indeed has taken me years to formulate, however, this has allowed me to make pro•m•emo elixirs very simple to use. Firstly, you do not have to have a degree in Chinese or Western herbal medicine, homeopathy or any formal education in Bach flowers to know how to use the pro•m•emo elixirs! Secondly, you do not need a Traditional Chinese Medicine practioner whom understands the importance of emotions on your health! This is because I have modelled the pro•m•emo elixirs on the theory of the Wu Xing (Five elements) based on my Chinese medicine education and the primary emotions associated with each of the five elements as discussed in our pro•m•emo Elixirs BLOG.

This means that there are only six pro•m•emo elixirs, unlike the 38 Bach flowers and thousands of herbs and homoeopathic items that exist, for you (or your practitioner) to choose from. If you have ever experienced an emotion, then you will know which of the six pro•m•emo elixirs to select, in order to assist you process that emotion! As they have been purposefully made as a liquid, they can be easily and effectively taken either directly under the tongue or mixed in with some water and then taken. Either way, not only are the pro•m•emo elixirs quick, simple and easy to use, economically its more cost effective and just as safe and reliable as Chinese herbal medicine, Western herbs, or Bach flower essences.

The pro•m•emo essences aim to assist you in the following three key ways:

These three actions collectively allow you to process your emotions thereby decreasing the need to manipulate, manage, deny, block, control, or impede or just not effectively deal with emotions. This therefore assists you to free up your ‘emotional processing unit’ to increasing the output of your system, which means less overwhelm and an enhanced ability to deal with stress (inputs). An ongoing benefit when your ‘emotional processing unit’ is functioning efficiently is the ability to make intelligent and informed decisions without overwhelm. This therefore opens you up to the possibility of finding solutions to life’s problems so that you are in flow and harmony within your life.

I have learned over my career that it is a waste of time discussing the subject of emotional health with an “emotionally strong” person who doesn’t suspect that they get mood swings, can be reactive or have a problem managing their emotions. I’m only interested in helping someone like you, who knows that they struggle or have a problem (a flashing emotion-warning light) and is looking for a solution to it. All I can ask you to do is to open your mind, look at the facts and use your common sense. The best way to understand how the pro•m•emo elixirs work is to therefore use them yourself. Albeit, this is a subjective experience, it is your experience. As advocated by the Bach Centre with the Bach flower essences “We don’t see it as our role to ‘prove’ that the remedies work, then – instead we simply demonstrate how to use them and let people prove the effect on themselves”. We believe from the positive feedback we have receive with the pro•m•emo elixirs that they like Bach remedies will be embraced and will bring about positive changes in your life. We welcome your feedback and experiences using the pro•m•emo elixirs. Need more proof?